WHAT THE BIBLE SAYS ABOUT SEX 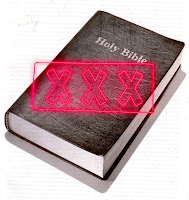 I read a review about two new books on what the Bible says about sex.

Both books have been written by university scholars for a popular audience -- scholars who are trying to answer this question. Both authors, aware that conservative Christians say the Bible incontrovertibly supports sex within the constraints of “traditional marriage," attempt to prove otherwise.

Authors Jennifer Wright Knust and Michael Coogan mine the Bible for its most inexplicable tales about sex. Jephthath, who sacrifices his virgin daughter to God; and Naomi and Ruth, who vow to love one another until death, are used to show that the Bible’s teachings on sex are not as coherent as the religious right would have people believe.

Jennifer Knust writes in her book, "Unprotected Texts: The Bible ’s Surprising Contradictions About Sex and Desire" -- I am tired of watching those who are supposed to care about the Bible reduce its stories and teachings to slogans. Her book comes out this month. Michael Coogan’s book, "God and Sex: What the Bible Really Says" was released last fall.

Jennifer's book starts off with a bang -- describing a passage in the Bible's "Song of Songs." Jennifer paints the picture of young lovers aching with desire, the man lingering over his lover’s eyes and hair, on her teeth, lips, temples, neck, and breasts, until he arrives at “the mount of myrrh.” She quotes him rhapsodizing --. “All of you is beautiful, my love, There is no flaw in you.” She quotes the girl replying, “My lover thrust his hand through the hole, and my insides groaned because of him.”

I read the "Song of Songs" many years ago, when my modern dance teacher, Charles Weidman, was creating a modern dance version of it. I don't remember reading anything like that, but I have to admit, I was skimming, looking for the plot.

Clearly, there's a battle going on. Conservatives say “Sexual intimacy outside of a public, lifelong commitment between a man and woman is not in accordance with God’s creating or redeeming purposes.” Liberals, on the other hand, wish the Bible were more permissive on sex.

Author Jennifer says “The Bible doesn’t have to be an invader with its pronouncements and demands -- it can be a partner in figuring out what it means to live in bodies that are filled with longing.” She mentions some of the most famous tales of biblical sexuality -- Abraham fathers children with Sarah and her servant Hagar -- Jacob marries Rachel and her sister Leah, as well as their servants. Jennifer reminds us that Jesus was celibate, as was Paul -- husbands owned their wives, fathers owned their daughters -- a girl’s virginity was her father’s to protect or relinquish -- Lot offers his two virgin daughters to the angry mob that surrounds his house in Sodom -- female adulterers were put to death. Paul demanded “women be silent in churches.” It's still the rationale among some conservative denominations for barring women from the pulpit.

And Jennifer reignites the gay marriage debate with many references, aside from Ruth and Noami -- sex between two men being "an abomination,” (in the King James translation), and what King David said, lamenting the death of his soul mate Jonathan -- "Your love to me was wonderful, passing the love of women."

I have to admit that in reading the review comparing the two new books, I was jolted by the discussion of biblical references to the genitals as "hands," and sometimes as “feet.” Michael Coogan, in his book cites a passage in which a baby is born “between a mother’s feet,” and another, in which the Prophet Isaiah promises that a punitive God will shave the hair from the Israelites’ heads, chins, and “feet.”

Author Michael says when he's teaching his college students about the scene in "Luke," in which a woman kisses and washes Jesus's feet, and dries them with her hair, someone always asks, "Is that genitals? In his book, Michael fence-sits, saying “sexual innuendo may be present.”

Okay, I'm not a Bible-reader or a church-goer, but I have to ask why are we digging into old words, old ideas, written by various authors in different languages -- words that have been translated and re-translated many times? Why are we still, paying so much attention -- pro and con discussing what was meant by words in a very, very old, inconsistently authored book?

We are living in such a different world. It's confusing, and ... well, it's not dumb but it's a little ridiculous, trying to figure out what was meant thousands of years ago, when every day we are seeing, feeling and being bombarded by new things.

We need to react, and go with what makes sense -- what brings us pleasure, and do, or not do what feels right, not wrong.
Posted by em's talkery at 4:00 AM

There is nothing rational about religion or any books that serve religious belief. Extremist of any religions place their fear/commitment to their religion above all things that make us human. Religion is irrelevant to being a 'good human being' but the destructive force of religion has never been good for human beings. Religion is an addiction, there is no rational discussion that can penetrate these beliefs based on myth, fear and ignorance constructed for the purpose of money, power and control of people. There is a blind mindless following of religion just as there is in those addicted to other forms of self-medication. xxxooo H.