BOO FOR BUSH THE ELDER 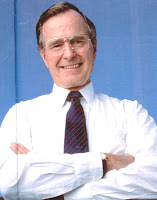 Early this morning, I started reading about George Herbert Walker Bush, the father of George Walker.

I picked this picture -- "I know what I'm doing," says the look of the elder Bush in his starched, neat, white shirt.

Yes, he was the 41st president and his son was number 43, and that's quite an accomplishment for a family that's not a political dynasty, though the potential has been mentioned.

Using various writer's techniques -- research, concentrated thought, and the stream-of-conscious words that float into my mind .-- I keep bumping into IRAN-CONTRA, RON REAGAN, DAN QUAYLE, OLIVER NORTH, NORIEGA and COVER UP.
. .
I find myself picturing Barbara Bush -- her stern face. She has always made me feel sorry for her husband -- to me she looks more like a grandma than a wife.

And whoosh -- thoughts about son George, our 43rd president's wars, and the omnipresent Cheney, who worked for Daddy -- the lies, wrong laws, the endless list of wrong things son George's administration did that we are still paying for.

We are stuck with Republican Boehner fronting a House of Representative that's accomplishing nothing -- no laws, no new legislation -- just a presentation by Republican Senator Ryan of his plan for repealing health care, for reducing the size of government. and paying off the national debt that could negatively affect the lives of 70% of our population.

And so we have blame news. naming this guy or that guy, but blaming President Obama, for not doing something, NOT being decisive. NOT getting something done, though everything Obama says, does, or suggests gets a NO from the Republicans, as per their plan to stop Obama from winning a second term.
.
The main reason I don't like George the elder is because he fathered Georg W. Also, he fathered Jeb, and on and off over the years, Bush 41 has smiled proudly, beneficently, at the whispers about a political dynasty, (while I cringe).

The IRAN CONTRA COVER UP did involve President Reagan, but we'll never know how, or to what extent. The scandal ended with 14 people indicted, including then-Secretary of Defense Caspar Weinberger -- 11 convictions resulted, some of which were vacated on appeal. The rest of those indicted (or convicted), were all pardoned in the final days of George H. W. Bush's presidency. Some, who were convicted of felonies, and subsequently pardoned, later became members of the administration of our43rd President, George W. Bush.

And Congress is hell bent on paying off a debt that was created by the elder's son George 's tax abatements for the wealthy, which include Goerge H.W. Bush, his son George, and the omnipresent Dick Cheney. (Though experts agree that cutting the tax abatements and renegotiating the repayment of the interest on the debt could pay off the debt.)

My fingers freeze. (I'm having trouble writing about this.) Obama awarded Bush 41 the Medal of freedom, praising Bush’s humility and decency; his career of service that spanned seven decades, saying, “We celebrate an extraordinary life of service and of sacrifice. This is a gentleman, inspiring citizens to become points of light in service to others.”

If I could, I'd take away the medal -- I feel we are paying for the elder Bush, our 41st President's mistakes, that were compounded our 43rd president, his son.
.
Posted by em's talkery at 4:00 AM

I disagree with you. Although I didn't like him at the time, looking back I don't think he was a bad president. He made some tough decisions that hurt him politically. He had a good sense for international politics. And I don't think we can blame him for his son.

Agree with every word you wrote today! Nothing more needs to be added.

To all your thoughts, Em, I say, "That makes two of us!!!" --And don't forget another horrible son, Neil Bush, and the Silverado Savings & Loan debacle. NEVER has enough been reported about him!!!