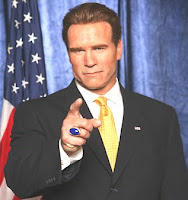 My favorite "Arnold" was in the movie, "Twins," where diminutive Danny DeVito and bulky, big Arnold were searching for their mom. The Terminator guy didn't thrill me, but I loved Arnold -- the look of him and his sense of humor -- in that movie.

The former Governor of California, trailed by paparazzi, was in London for Gorbachev's 80th birthday celebration at Albert Hall, a super gala hosted by Sharon Stone and Kevin Spacey. The party was crammed with distinguished people, but I'll bet Arnold was the star attraction.

Chatting about his future, with Newsweek reporter, Andrew Testa, as if they were dear old friends, Arnold explained he was having fun flying around Europe, seeing the sights, and job hunting, figuring the "Hunters," (big time major CEO's), would find him.

And they do, Testa reported, describing how their interview was being interrupted -- everyone seemed to want Arnold's autograph for their kids and grand children.

Arnold said, "AT 63, I can do anything. I feel terrific about where I am in my life, when I look back at what I’ve accomplished. But I feel shitty when I look at myself in the mirror.”

(Yep -- the five-time Mr. Universe, seven-time Mr. Olympia. the winner of the annual International Bodybuilding competition; Conan the Barbarian, and the Terminator, was musing about aging the way many of us are doing nowadays, though in my opinion he looks great. And I love the pictures of him and Maria Shiver, his wife of 25 years. mother of their four kids -- though I miss her as a television commentator -- they are a great looking couple.

The suntanned, strapping Arnold, who's very frank about his body, told the Newsweek reporter that he's 6'1 now, no longer 6'2, and his 31' waist and 57' chest are currently an average guy's 36' waist, 40' chest. He also admitted that his reddish-brown hair was maintained by a Beverly Hills salon, and complained about his crow's feet, and the fatty folds around his strong jaw.

So, what's next -- an autobiography? More movies -- I can't see him playing dads, uncles, or granddads.-- not after his journey from Austrian bodybuilder, action hero to Governor of California -- this guy's been in the news politically, full-time for seven years.

Arnold himself has said he will be working with the United Nations and his global climate projects, supporting the Special Olympics, and his annual bodybuilding and sports convention in Ohio, while continuing to work on Immigration reform.

Meanwhile, he's heading to Cannes to receive the Légion D’honneur, and hype his new TV show at a TV buyers’ convention -- it's an animated kids’ series titled the "Governator," that will debut along with a comic book, video-game, toys, t-shirts, and toothbrushes bearing his cartoon likeness. And of course he'll be meeting producers who may have other interesting jobs, but I think Arnold Swartzenegger wants more -- much, much more -- than another movie/money-making gig.

Just the other day The Daily Mirror, UK, reported (quoting one of Arnold's personal associates), "Swartzenegger may be running for the Presidency of the European Union, after the current president of the 27-nation bloc steps down."

We've heard, more than a few times, that if it were constitutionally possible, Arnold would have run for president, and President of the EU would be an appropriate challenge, but I can't help thinking how marvelous it would be, if the vitality of this Republican hero-guy was put to work by the Democrats.

In an MSNBC interview the day after he became an ex-governor, (see below), Arnold said, "If the Obama administration tapped me, I am available for environmental things -- or if they can use my talent, my personality, my star power. I will be happy to help in any way possible."

Hooray! I second the motion! Immigration -- maybe Obama power plus Swatzenegger power can overhaul the mess, the confusion in our current immigration laws.

We have a friend who was high up in his administration who says he was not a good governor: all show and insufficient substance.

Absolutely, Em. I second that. i would have voted for him...campaigned for him even, if he'd run for president here. I would love to see him work in a leadership role in the EU. However, I have to wonder how much of a culture shock it would be for him to re-enter that world after achieving so much here. My more worldly friends tell me that the Europeans are not as wowed by star power as we Yanks are (unless the stars are Royalty).

You don't know me, but my wife (your Facebook connection) turned me on to your work. Love your writing and absolutely love the video podcast you do with your husband. Great talent in a very interesting couple. Thanks for communicating with us.

Em, I really do not love Arnold. If you were living in CA, as I was and do, you would not have loved him as a "governator". A man who is married to the daughter of the founder of The Special Olympics, showed very, very little compassion for the elderly, disabled and other people with special needs, when in office! He cut or limited too many programs,that benefited people in those positions. I could never forgive him for those things alone! To make it impossible to get any kind of home care and force those people into government run nursing homes (where they loose their personal freedom and dignity!) and actually are far less cost efficient than home care. To me that is unforgivable!

I like Maria. I always have. Arnold, I prefer in movies and not in politics. We do not see eye to eye, Arnold and I!

I really only liked him in Twins as well. I am not at all a fan of those action, "scifi" type movies that he and Sylvester Stallone made. I was cajoled into watching some of them by my ex husband and did try to enjoy them..but didn't.

Maybe Arnold has some good ideas and maybe I am being too short sighted, but I had many bones to pick with him about his governorship.