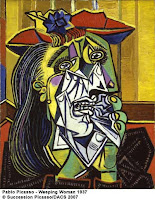 I wrote about painter Mark Rothko last May because one of his paintings sold for $72 million.

Rothko, in 1970, slit his wrists and ended his life just as he was finally, after years of struggle, successful in terms of the art world's approval of his work, and earning money.

Money and approval -- Rothko was actually achieving both -- why did he choose to end his life?

It's on my mind. It's another no-no-don't-open this subject, that I need to open because we don't exchange with our friends, relatives and dearest ones the deeply, sometimes even frighteningly negative thoughts that occur to us.

You can mention that you are not working well, and even admit --"I've been confused." You can toss off "I'm feeling cranky today." Females moan, "I've got PMT," and guys groan about "Not getting it up," but with whom do you discuss a wave of heaviness, a sense that life isn't worth living?

Even if the thought goes away, it can return, and you, more than likely, deal with it privately.

Suicide, suicidal despair, a feeling that whatever you do is bound to fail, the blues -- the singing of the blues by Robert Johnson, or any of the other great blues singers -- you can listen and ache but no no -- don't say, speak, convey, or show it, when death, not living, ending your life, is on your mind.

People END their lives for many reasons, often reasons that have to do with a doomful portending thing -- an illness, a something that's going to happen and can't be stopped, and the person doesn't want to wait for it, or suffer.

When the poet, William Ernest Henley, whose leg had been amputated because of tuberculosis, learned that his other leg needed to be amputated, he wrote "Invictus," a poem about his unconquerable soul. (It's an often-quoted poem; also the poem and the title of a recent movie about Nelson Mandela.)

I memorized it -- it was a vow I made when I was five-years-old. I wanted to be a dancer "till death do me part," and a friend of my mother's was going to look me over, and tell my mother if investing in dance lessons for me was a good idea.

Child Emily's favorite part of the poem was --"No matter how straight the gate, how charged with punishments the scroll, I am the master of my fate, the captain of my soul." And my vision of "artist" is still the young child's vision of himself/herself alone, under the sky, no parent nearby. a sense of loneness -- no one in charge, no one protecting or in control of me but me.

What I'm feeling strongly about successful artists, (like Rothko, whose "White Ceiling" painting sold for millions last year), and striving, young, unknown artists who feel they are failing, -- they end their lives in order to continue to be the boss, the controller, the person in charge.

I think NON artists (if that's you -- if the shoe fits, put it on) -- you guys who work to earn money in order to support yourself and your family -- I sense that you feel the same way. Maybe the artist has more freedom to think "I don't have to do this -- I want to quit," but I have learned from my own thoughts about suicide, that suicide -- implementing the killing of yourself is rage, anger -- is a way of punishing, hurting, creating pain for someone you blame for how you are feeling.

Think about it -- dig into this thought for moment: You are making others suffer. If the feeling of wanting to die becomes that strong, open your mouth and share it with someone. Actually killing yourself should not be an option. It's irrevocable. It's a wasteful, stupid thing to do.
Posted by em's talkery at 4:00 AM

I am ashamed to say that I have had moments of these kind of thoughts in the last year since losing my job. I am 54 and have had much difficulty finding a new position, and at times my life seems like it is spiraling out of my control. My faith and belief system has been my safety net - but it is really difficult at times, especially since I am single and alone. for the most part. I have truly found out that the old blues song "Nobody Wants You When Your Down And Out" has many truths in it in the last year.

Seriously curious, Em--How is it anyone can be sure of this: "Actually killing yourself should not be an option. It's irrevocable. It's a wasteful, stupid thing to do." Irrevocable, yes. But wasteful and stupid? Wouldn't the person him- or herself be the only one to measure that? If one were to counter with the usual "Oh, it's so selfish" argument--isn't every choice a selfish choice? Even the seemingly most altruistic choices surely come with a payoff of some sort, even if it's just that it makes us feel good about ourselves to help another.

Do we consider the acts of suicide 'selfish' because we have had loved ones (or even people we just 'know of') and whatever they bring to us taken out of our lives? Who's being selfish then, really?

I learned years ago of an ex-girlfriend who had taken herself to a spot on the Oregon coast, along with a bottle of her favorite Scotch and a bottle of pills. She built herself something akin to a pyre out of driftwood, laid herself down on it, and swallowed her stuff--the only things she felt she *could* swallow any more, I'm sure. I felt relief for her, knowing the long struggles she had had.

'Terminal illness' comes in many forms, not all 'physical'. I believe that euthanasia should be an available choice. Even if that option is self-prescribed. Too bad it never seems to come without stigma.

I'm not arguing with you, Em, just poking in with my two cents worth--life/death/suicide, attitudes toward death in our culture are things I think about a lot. And I'm sure my feelings are different from most people I know....