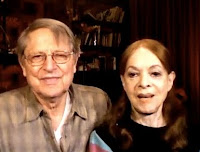 As usual, John is somewhat taken aback by the subject -- since Emily doesn't tell him what they're going to chat about, before they turn on the camera.

He reveals that he was NOT thrilled by what everyone thought would thrill him-- Alan Lerner hiring him to play the lead in "On a Clear Day." He was just challenged and totally focused on the work -- in fact, he learned the show and was onstage performing it after one week of rehearsal.

Thrill ... the Cullums agree, is what your friends, and loving relatives, feel when something wonderful happens for a professional performer.

What truly thrilled John Cullum and Emily Frankel was the opening night of "Cyrano" in Boston. Emily had written and adapted the play for John and it was exciting, a big break when Arthur Storch directed the play at Syracuse University. and at Atlanta's Alliance Theater. But the high point, the thrill was the audience response, when their "Cyrano" opened at Boston's Colonial Theater. Then the rave reviews, the doors that opened for them both, because of Emily's adaptation.

As the Cullums chat and recall the trivial things that came with their success, we learn that Boston was John Cullum's "good luck" town," because "On a Clear Day," "Shenandoah," and "On the Twentieth Century," as well as "Cyrano" had their premiere performances at the gracious grand Colonial Theater.

I believe that you (Emily) were the one to introduce me to Thus Spake Zarathustra. Or rather I came over all thrilled about the music at the beginning of the movie 2001 and you introduced me to the musical source.