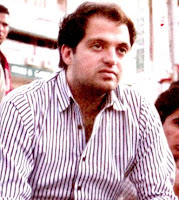 Joe Klein. a columnist for Time Magazine, said, "he s the face of the new Middle East ... I meet with him and several other young Palestinians at the local Coca-Cola Bottling Company headquarters in Ramallah, which tells you something important about this movement. We are not meeting in a mosque. He is a Palestinian who returned home to start an alternative-energy company and see what he can do to help create a Palestinian state. He identifies with neither of the two preeminent Palestinian political factions, Hamas and Fatah. His allegiance is to the Facebook multitudes, rebels who orchestrated the overthrow of Mubarak in Egypt, and who are organizing non-violent protests throughout the region."

Gee, after so many angry, attacking, shouting guys in the news, it's wonderful to see a fresh face and find out about this guy. He looks and sounds as if he's an up-and-coming leader and hero.

On Facebook, I "friended" him, sent him a vlog to introduce myself. I told him I was writing about him and promised to send him this post. Will I get reply? (If I do -- gee, maybe you'll see Em's picture on his page.)

How did he get into the news? March 15th, Fadi's group launched a small, semi-successful protest in the West Bank and Gaza. Right now they're doing small, nightly vigils in the main square of Ramallah, apparently discussing and planning what NON-violent protest they'll do next.

At a press briefing for young Palestinian activists, Fadi said, "I was in the seventh grade when it [the uprising] began. Prior to that, I was very interested in science and in physics, in doing physics research. But when the uprising came, childhood friends were wounded by Israeli gunfire; others were forced to emigrate to the U.S. My passion for science got me into Stanford, and last spring [I] completed a BS in Physics and a BA in International Relations. I returned to Ramallah to pursue a master's degree in Palestinian law at Birzeit University, and work on an initiative to bring renewable energy to Palestine."

Then, Fadi went on to explain, "A vast majority of Palestinians who are refugees really don't get these opportunities to become a physicist, or to have a normal life. The lack of freedom sucks the life out of their dreams. I realized that to achieve our goals, which are the goals of all humanity -- freedom, justice, dignity -- I needed to first get rid of the oppressive structures that exist in Palestine. That's when I began doing activism."

I love the fact that Fadi named his Website/blog "The Gandhi-King Community " and has offered to answer questions. He has stated, very clearly, that he was Muslim, that he is no longer Muslim, and he, as well as his other team members, have realized it's difficult for people to know what to believe about the core teachings of Islam.

In his blog, Fadi mentions they've received many negative comments.
.
Will the Gandhi-King Community grow? Will it include Israelis as well as Palestinians? I am hoping, hoping, hoping it will.
Posted by em's talkery at 4:00 AM

I missed reading this article in Time, thanks for posting this. Hopeful,and exciting to see options available in the Mid East.

This is wonderful! I hope so too!