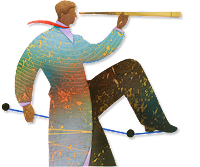 Where are we heading with social media?

Tweeting is -- gee -- it feels like senseless babble, but I'm tweeting daily, to get readers, hoping tweeters I'm "following" will read my blog.

BONG! stuff I've been reading is tolling in my mind.

Zachary Karabell -- BONG -- this fortyish money manager says it's very significant, that we Tweet, Facebook, or are LinkedIn -- that when we're on Groupon, Yelp, Yammer, Flickr, Ning, Digg, or any of the new social networks, any one of them may 'boom,' and become the next super star, bigger than Facebook.

Articles about "the economy" are what I usually skip, but this brainy, knowledgeable guy was focused on "social media," which sort of fascinates me.

Zach said social media is thriving and proved it with numbers. Facebook is worth $75 billion. GroupOn is worth about $25 billion. Zach claims the guys who invented these Websites make money and some of their investors make some money, but -- BONG -- social media thriving does not help "the economy." According to Zach, if social media created more jobs, it would help the economy, and he proves it with numbers: last year social media created 21,000 jobs, which is just a tiny percentage of the 150 million jobs that are needed for our work force in a healthy economy.

I'm thinking "not yet." I have a "not yet" folder on my desk, for ideas I might want to write about. Gee, it was 1999, when I heard about an "Internet, and started fumbling with stuff on AOL. NEVER did I think that 20 years later I'd be blogging, social-media-ing, You-tubing searching, shopping, seven days a week on the Internet.

Zach mentioned a Pew study. (Economy experts often quote the "Pew reports.") It said that 45% of adults making less than $30,000 have access to "broadband." (You can't do social media effectively if you don't have high-speed internet.)

Zach said these low-income guys, more than likely, even if they get laptops, probably won't bother with social media -- it's getting too complicated, even for the rich, educated guys with fancy computers.

Maybe Zach needs a "not yet" folder. Don't most of those low-income guys have cell phones? What about lower, low-priced "social media apps? Those guys on their cells -- face-booking, tweeting, yammering -- they might boom-boom BOOM the whole damn economy?

Hey, maybe I ought to send Zach's blog a heads-up, an Em Talkery prediction?

Hmm. I'm putting all this BONG BONG stuff in my "not yet" folder.
Posted by em's talkery at 4:00 AM