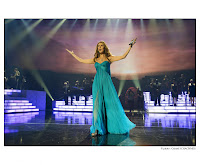 Celine Dion thrills a sell-out crowd of 4,200 at Caes

ar's Palace, while a Las Vegas resident strums his guitar in his home sweet home underground.

Too many things that we take for granted seem to be changing, obsolescing, disappearing, falling apart.

Golly, we need our "sin city," in the way that we need a guy like Hugh Hefner, banana-splits, and Elvis. Vegas, like Miami, has been a ;place to MUST-visit for gambling, fancy dining, big shows -- being entertained by super stars such as Celine Dion, Rod Stewart, and Elton John.

Celine Dion has signed a $100 million contract for 210 performances over the next three years. Rod Stewart and Elton John have similar three-year contracts.

However, according to Newsweek, the mega-resorts, along the Vegas strip, have been losing money over the past two years -- more than $6 billion, and unemployment is at nearly 14 percent, the nation’s worst rate among big cities.

Okay, unemployment's a problem everywhere, but it's killing what Vegas is -- a glamorous place where you can escape what's happening in your world. (And just a few short blocks from the strip there's uncollected garbage, boarded-up storefronts, shabby folks standing around, or sleeping here and there. )

Foreclosures and layoffs have been torching the dreams of the men and women who create the illusion -- cocktail waitress in their sateen miniskirts, the towel boys who work the "bacchus" pools, the cooks at Nero's Steakhouse, as well as bus boys, maids, janitors, bellboys, and would-be chorus kids.

The policemen who deliver the foreclosures, the eviction and lockout notices, who get $42 for delivering a notice, aren't complaining -- their earnings are up. The fact is, notices often can't be delivered because the person no longer lives at his address, or works at his place of employment.

Matthew O'Brien, a journalist who is currently raising funds to help the homeless, wrote about this in "Beneath the Neon." Near the Welcome to Las Vegas sign, below this trash-strewn area, there are miles and miles of drainage pipes and tunnels where bums have lived off and on for years. Since the recession, the tunnels have become increasingly populated by the unemployed.

The resident in the picture above, was a maintenance worker. He sleeps on a couch he found in a dumpster. He says he lost his job a year ago and couldn’t afford to pay his $675 rent. He guards his "home" with a BB gun because crime in his tunnel is rampant.

The Mayor of Las Vegas, Oscar Goodman, doesn’t seem unduly worried about the underlying desperation in Las Vegas. When Newsweek asked him about the loss of 140, 000 jobs, Goodman said, “I have no doubt they'll be back." When the reporter asked about the 2 million–person decline in annual visitors, the Mayor, brimming with optimism, said, “Give them time to buy a ticket!”

Well, Celine, Rod, end Elton are big names. Caesars Palace has its spectacularly beautifully, newly renovated Coliseum theater for them. Maybe sell-out crowds will be flocking into Vegas over the next three years, and super stars can save Las Vegas.

Author O'Brien's foundation, "Shine a light," is a community project that helps the hundreds living in the tunnels. I'm sending a donation to thesewersofparis@yahoo.com@yahoo.com
as "Shine a Light" suggests.
Posted by em's talkery at 4:00 AM

That is amazing. I had no idea of this extreme situation that you described. Thanks for making us aware of it and for posting the info of the charity.

I have never been to Vegas. I never wanted to go there. Its simply not my kind of place. I have been to Atlantic City, since they made it a gambler's oasis. Atlantic City has always had those extremes as well.

Its so sad and so frustrating to see what is happening to people's lives in this dreadful economy. Will it ever get better? Boy, I sure hope so!

It is terrible that so many people are homeless and in great need in a land where a Celine can make a multi-million dollar deal and where celebrities in Hollywood shop for thousand dollar pairs of shoes. I have made a friend on Facebook who was recently evicted from their home due to financial mis-fortune, and this very night is messaging that she is looking for a place to stay tonight. It kills me that I cannot help her, but it kills me even more that the economy is in such bad shape that it has put many people in these positions. Things are bad out there- really, worse than most people are led to believe.